The Coffee Sensor flow control device allows the user to vary the amount of water flowing through the group head with a special needle valve that goes up or down. allowing the user to profile the extractions.  Variable flow control allows for lengthy pre-infusion for more even saturation and extraction of your espresso.

The included pressure gauge will allow you to measure the pressure going through the group head during the brewing process.  It screws right into the front of the group head instead of the M6 Allen screw

The coffee sensor flow control device is compatible with most Profitec, ECM, Rocket, Lelit, Bezzera and other machines using an E61 group head.

Upgrade the look if the flow control device with a walnut knob.

Got this since I was replacing the mushroom on my Rocket R58 anyway. Fantastic service from the Coffee Addicts team - will only by here from now on!
The flow control takes some getting used to, but installation is straightforward (remember to tape the nuts so you don't scratch them, and the upper spring and valve stay put). Lots of info online about how to use this, but be prepared for a bit of a learning curve. Also, take a stock flow rate measurement for your machine BEFORE you install, cause it will be helpful to you after installation.

What a gret tool for better Espresso! New flavors were discovered, together with more fun pulling shots. Easy installation. 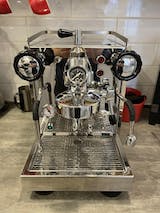 Easy install and quality kit. Wonder if anyone else has noticed the pressure gauge needle isn’t very smooth. Jerks around and sometimes I need to tap the gauge window for the needle to wake up? 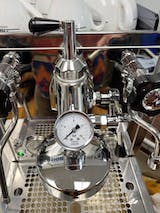 B
Ben Lindo (Toronto, ON)
Nice quality, best price here! Works well, seems to be the same as the ECM brand one except cheaper!

Remember it's flow control, not pressure profiling. So it's not really equivalent to something like a "Decent" machine. You can control the flow rate, which is related to the pressure but you're still limited by your coffee beds resistance and your machines max pressure set by the pump or OPV (which you can also adjust usually but I wouldn't recommend that). Basically you can do a sloooow ramp up or extended pre-infusion but if you ground the coffee right, even at low flow rate it will eventually build up pressure and hit 9 bars. You can slow flow rate enough so the flow going out is greater than in and that will reduce the pressure if you want a lower pressure extraction for a sweeter / milder coffee (6 bars ish). But I find I usually just do a slow ramp up and then ramp down (not sure if that's 'best' though). But the neat thing is it does allow you to experiment more if you're into that.

One thing I found is useful though, if you accidentally grind too coarse while trying to dial in a new coffee, if your ready for it, you can slow down the flow rate and save your coffee, pull a low flow low pressure 30-ish second coffee People do this purposely I believe it's something like a 'spro over' type drink. It usually turns out nice, but not very espresso like. Definitely worth trying, supposed to be good for fruity light roasts, definitely better than without flow control, pulling a 10 second 40gram shot. Because it was ground too coarse (or sometimes just because coffee was too fresh and acting up due to off-gassing!).

I got this for my Rocket Giotto V PID, comes with an extra stiffer spring which removes the built in quick pre-infusion feature on most E61 group machines. I don't mind the auto-mini-pre-infusion so I ended up putting the original spring back in. Installation isn't too hard / scary. Just was super worried about slipping and scratching the machine. Use tape on your tools and machine to protect it and try not to slip! :)
If you want to make the installation even easier you can skip doing the bottom spring part (it will auto-preinfuse still).

I found for my machine the original gasket from my Rocket machine fit better, so I'd suggest just re-using that one, with the kits included tefflon(?) seal thing I was noticing a slow leak.

It also comes with two styles of knobs which is a nice touch.
The Mushroom is stainless steel I believe which is supposed to be a good material for that (Original one in photo is ceramic for my Rocket!).
The Pressure gauge is really great to see when the pressure builds up, how it builds up how it declines as the puck degrades or flow slows etc. Also nice in black!

One annoying issue:
Sometimes it's nice and smooth to rotate the knob, other times it's kinda stiff and doesn't feel so 'nice'.
I have an ECM Synchronika now that also came with the flow control on it and it seems functionally equivalent. It also suffers from the stiff knob turning sometimes (usually).

One issue I had recently with the ECM (after about a year of use!) which could also potentially happen with this one since I believe they work the exact same,: I noticed flow rates are inconsistent lately (slower than expected) I believe there's a little scale build up causing a half-blockage. So that's something to be aware of possibly happening, it's a tiny hole that controls the flow, so it's going to be one of the first places that would be affected by scale. Good early warning to keep an eye on your mineral content in your water! Just needs to be opened up and cleaned up (Citric acid or vinegar solution works to dissolve scale!).

Added to your cart: